The Minor in Popular Culture teaches methods for critically understanding popular literature, art, entertainment, social media, fashion, design, sports, music, performance, folklore, pastimes and rituals, and all forms of popular cultural expression encompassing the ways we live our everyday lives. Pop culture is an important source of ideological, moral, and political messages as well as aesthetic pleasure and recreation. Studying the forces that shape pop culture, and the ways we may respond and contribute to pop culture, gives vital insight into daily life, citizenship, and what it means to participate in society.

Studying pop culture offers the advantage of deep critical and historical understanding for those who may wish to work in entertainment media or advertising, as well as teachers who may wish to use popular culture in their classrooms. This minor defines popular culture broadly as a global, multicultural phenomenon that embraces not only industrialized mass culture (the texts, images, products, genres, and styles created or spread via mass media) but also cultural expression at the individual and grassroots levels, as well as folk culture and communal ways of life. Students in the minor learn to analyze popular texts, media, and pastimes critically—to understand and engage with related theories, and reflect on the connections between popular culture and identity.

Many courses in the minor satisfy General Education requirements or may be used as electives or requirements in various majors. ENGL 421 A-Z may be taken twice for credit: once as a core course and once as an elective, provided the topics are different.

Pop Culture in the Classroom

"In the summer and fall of 2016, Iron Man went to war against Captain America, Batman squared off against Superman, the war between the Lannisters and the Starks entered its sixth year, and Donald Trump captured the American presidency. These events were not unrelated."

—Signs of Life in the U.S.A., ninth edition, by Sonia Maasik and Jack Solomon 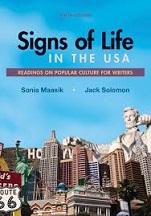 Dr. Jack Solomon is the English department faculty member who founded English 313: Studies in Popular Culture—the first course about pop culture at CSUN.  When asked why students should study popular culture, especially popular culture semiotics, Professor Solomon explained it is essential to understanding America. To add to this assertion, he offered this quote from the 9th edition of Signs of Life in the U.S.A.:

At a time when social conflict in the nation had grown to proportions not seen since the 1960s, then, it was not at all surprising that America's popular culture would reflect it.  Nor was it surprising that a well-known reality TV star would exploit that conflict to stage a successful presidential campaign.  For in America today, popular culture isn't just about entertainment, and entertainment isn't simply a matter of leisure time relaxation and recreation.  In an era when digital technology can take entertainment into the workplace, and work can be performed while being entertained, the former demarcations between what French sociologist Henri Lefebvre called "everyday life" and "festival," or workaday and play, have crumbled, creating a world in which entertainment reflects reality, and reality is shaped by entertainment.

Ultimately, Dr. Solomon, has concluded, “that Lucien Goldmann was wrong: it is not high (or elite) culture that expresses the spirit of a society; it is popular culture.”

Steven Wexler, co-creator of the Popular Culture Minor, has been teaching courses in popular culture, literature and film, and critical theory at CSUN for over ten years. He has written, published, and presented essays on the relation between film, TV media and the larger global economy. More specifically, Wexler’s work focuses on how popular culture reflects, interprets, and prescribes socioeconomic changes over the last fifty years. The rise of Reality Culture (e.g., The Kardashians, MTV’s Real World, The Jerry Springer, The Bachelor), as just one example, is defined by Wexler as both a supply-and-demand genre tailored to meet changing consumer attitudes among Gen Xers and Millennials as well as a cost-effective labor strategy for film and TV studios. The enormously successful James Bond franchise, as another example, has endured largely through its various depictions of cultural, political, and technological changes from the Cold War through the Swinging Sixties to today’s transnationalism. Depending on the course or theme, Wexler will often ask students to create Websites devoted to popular culture, write short scripts involving theorists, actors, and/or musical artists, and to lead discussions that include the use of film and TV clips, music video, and digital presentations. The goal is for students to illuminate the politics of culture so that they might better understand their relation to the culture they regularly consume and produce.

Themes in Professor Wexler's Literature and Film courses include—

Today one turns to fantasy to find reality, not to escape it. Game of Thrones, Harry Potter, and Lord of the Rings are progressive within the generic boundaries of contemporary fantasy since these texts and their remarkable histories radically allegorize our individuated and social experiences. Game of Thrones, for example, reveals the social totality in food, clothes, castles, and ideas rather than buries those relations in mere good vs. evil “reality” ethics. The Order of the Phoenix’s Dolores Umbridge is a nasty avatar for Reagan’s “Nation at Risk” and today’s corporate university. Peter Jackson’s Tolkien film The Fellowship of the Ring is often recognized as a cautionary tale of technology and addiction yet with the promise of positive change through community and participation. These amazing, productive fantasies present “radical cognitive mapping,” to borrow from Fredric Jameson, and allow readers and audiences to discover the “truth of our social life as a whole.”

Can anyone succeed in America? Can everyone? What exactly is success? The “American Dream” is among the most powerful national narratives of any epoch. Labor, love, and citizenry in the U.S. have been shaped by that dream through longstanding notions of hard work, efficiency, equality, ownership, democracy, freedom, and the individual.

This course examines the James Bond formation, the spectacle of espionage, nationalism, technology, and masculinity depicted in the Ian Fleming novels and Albert and Barbara Broccoli films, and the cultural capital "James Bond" brings. Our license to theorize will help us rethink 007's transformation over the last fifty years in light of our own political, economic, and cultural changes. With the help of agents Edward Said, David Harvey, Judith Butler, and others, we'll attempt to answer important questions such as how do You Only Live Twice and The Man with the Golden Gun orientalize the East? Does Auric Goldfinger personify the Federal Reserve under the gold standard? What do the various Bonds and Bond women suggest about our conceptions of sex and gender? How 3 does Live and Let Die appropriate civil rights consciousness on behalf of Cold War politics? Could Quantum of Solace be an illiberal glance at transnational capital, class disparity, corruption, and paranoia? Sample Syllabus

This course examines film’s representation of powerful dystopian novels such as George Orwell’s 1984, Ray Bradbury’s Fahrenheit 451, and Pierre Boulle’s Planet of the Apes. A close look at the relationship between these texts and others (e.g., Metropolis, Clockwork Orange, Minority Report, and Brazil) will lay bare aesthetic and philosophical visions of post-apocalyptic, totalitarian, and corporate-run societies. Sample Syllabus 1 (PDF) Sample Syllabus 2

Comics scholarship has exploded over the past decade, and academia is paying attention to comics (including graphic novels, comic books, comic strips, and webcomics) as never before. Comics@CSUN is our response to this upsurge of interest: a collaborative project that aims to advance comics studies and teaching across campus. This interdepartmental and inter-college partnership is bringing together diverse faculty to brainstorm campus events and teaching opportunities. We hope to involve as many teachers and students in this initiative as possible.

Building on the success of its 2016 symposium, the Comics@CSUN group is once hosting the Comics & Visuals Culture Conference on 3/10/18. It is devoted to student research in Comics Studies and allied fields. Please do not hesitate to contact us with questions and ideas, or simply to get acquainted!