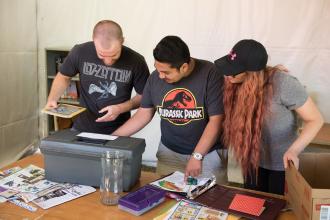 On April 28th, 2016 California State University, Northridge debuted Beat the Quake: An Earthquake Themed Puzzle Room. The goal of the event was to educate college students about earthquake risk and preparedness utilizing an interactive risk communication method. Students formed teams of 4-5 and were challenged to solve a series of puzzles before the earthquake hit, simulated by the earthquake early warning sound. This webpage is designed to provide details about the event and encourage other jurisdictions and agencies to implement the event to promote earthquake education.

On September 7th, 2016 Beat the Quake was recognized with a Silver Award from the California Emergency Services Association (CESA) Southern Chapter for the innovation and education displayed in its pilot year. 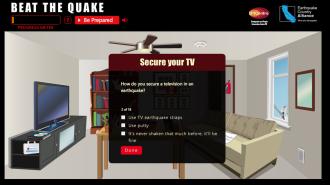 The inspiration for Beat the Quake came from an online, interactive game designed by the Earthquake Country Alliance, which challenges players to perform a series of mitigation actions in a virtual room to secure the space before the earthquake strikes. The player is on a timer of unknown length and must click various objects and furniture items in the virtual room, then select the correct mitigation strategy to properly secure the item. When the earthquake strikes, whichever items the player secured incorrectly or didn't have time to secure fall crashing to the ground, simulating the damage that non-structural hazards can cause in an earthquake.

Fascinated by this interactive tool, Emergency Preparedness Manager Jenny Novak considered how to employ a similar strategy of utilizing a gaming method to teach about earthquake concepts to a broader audience. We considered an online, social media campaign to encourage students to play the game, but were unsure if the impacts would be strongly felt. Having recently participated in an Escape Room with fellow emergency manager friends, Novak had the idea of bringing Beat the Quake to life in a live action escape room format.

What is an Escape Room?

Puzzle Rooms, also known as “Escape Rooms,” are live action, interactive games in which teams solve several thematic puzzles in a constrained timeframe to “escape the room.” Heightened adrenaline as time ticks away coupled with the necessity to employ teamwork to survive makes the puzzle room format ideal for experiential learning about disasters. Most escape rooms are 60 minutes in length and some can allow as many as 10 people to play together. Born in Japan in 2012, escape rooms are a growing international phenomenon in entertainment.

The format is particularly popular amongst young adults, making college campuses an ideal environment for this type of game. In order to learn about designing an escape room, creator Jenny Novak read the book Escape the Game: How to make puzzle and escape rooms by Adam Clare for design and puzzle ideas.

The event was designed by a truly collaborative team, and was a good example of a successful public-private sector partnership. After an initial successful event designing CSUN's Zombie Preparedness Scavenger Hunt in Fall 2015, CSUN's Emergency Preparedness Coalition was born. The Coalition reconvened in Spring 2016 to create Beat the Quake, and added some new members as well. The following made up our planning team, which met every other week for 3 months:

It was important for both Emergency Management and Geology Faculty to partner with Student Affairs Marketing & Program professionals, who knew the best methods for reaching CSUN's student population and had the best understanding of how the event would fit into CSUN's existing social & educational programming. Partnerships with these organizations and departments also allowed the team to multiply the messaging impact through usage of most impactful social media accounts on campus.

Having students and faculty involved in the development of the game was also critical, as students had the best knowledge of what would be both fun and impactful, as well as direct social connections to student clubs and organizations. Faculty were key partners as they were able to share the event with many students in their classes and some event offered extra credit for participation.

Beat the Quake was a recipient of the Earthquake Country Alliance Southern California's 2016 mini-award grant, which provided $500 toward the development of the program. Partnering with the Earthquake Country Alliance and the American Red Cross also helped leverage attention about the event beyond campus boundaries into surrounding communities in Southern California. We were also able to partner with a local escape room, Amazing Escape Room of California, located in Northridge.

Utilizing a preparedness coalition whose membership is built with partners who have not traditionally been employed in disaster preparedness efforts, Beat the Quake was designed with enhancing community resiliency as a key goal from the very beginning. We wanted to take the community's rich history of resilience from the 1994 earthquake and showcase it for younger generations--many of CSUN's current student population were not yet born in 1994.

The game was supplemented with informational tabling provided by both internal and external partners including American Red Cross, Earthquake Country Alliance, CSUN’s Police Department, CERT team, Student Health Center and Career Center. These community partners connect students with local opportunities, services, and resources to enhance overall resilience and strengthen the social fabric of CSUN’s community. Participants were free to visit the tables both before and after playing the game. Additionally, students from CSUN’s general education GEOL104: Living with Earthquakes class presented their semester project posters adjacent to the tabling.

We know that a more active and involved community population is better able to adapt to and bounce back from extreme events. The design of Beat the Quake maximized further development of an engaged community both on and off campus.

As the team had never designed an escape room before, it was imperative that the puzzles be tested before the event day to ensure that the level of difficulty was appropriate. Both Geology major and non-majors were recruited to test the room and provide feedback. The testing process was important to see how many human resources were needed to support the rooms. It was determined that moderators and a pit crew to reset the room would be essential in addition to registration and educational support.

This meant that we had to obtain all props prior to testing, which was a challenge. Props were a big part of making Beat the Quake a success, and potential organizers should be aware that the event is resource intensive to pull off. Obtaining furniture and decorative items in order to create cluttered, "lived in" rooms was one initial challenge for organizers. The second challenge was gathering props that were related to the puzzles. This included toolboxes with customizable combination locks, mitigation items (velcro straps, museum putty, non-skid liners), earthquake fault maps, CSUN emergency procedures posters, 2 sets of disaster preparedness items to go into a kit, note cards with clues, and labeled binders.

In order to maximize exposure, it was decided to hold the event outdoors as a kind of “pop up” escape room, utilizing tenting. Both online advance sign-ups and walk up sign-ups were allowed. Partner faculty members helped promote the event by offering extra credit to students for participation. We ran two escape rooms simultaneously from 10AM - 2PM, scheduling 15 minute blocks for teams of 4. This allowed us to serve a maximum capacity of 128 students in a single day event.

The planning process also included the development of a strong 1990’s theme with accompanying fun graphics, immersive decorations and themed prizes in order to entice students to participate in the event. For top scoring teams, the grand prizes included a gift certificate to a local escape room, Amazing Escape Room of California, 90’s movies and music, disaster movies, and earthquake Jenga.

The room was set in February of 1994, just weeks after the 6.7 magnitude earthquake that struck Northridge. The scenario was that participants were helping a friend who had just moved from the East Coast to Northridge to secure her apartment against earthquakes. This created a sense of urgency due to the aftershock sequence as well as a sense of personal relevance for current students to understand this actually happened on their campus.

The puzzles were designed to be both educational and to evoke logic based challenges that are at the heart of an escape room experience. Moderators from the American Red Cross utilized a scoring rubric to determine which teams achieved the highest scores. At the 9-minute mark, the moderator would play the earthquake early warning sound to simulate the earthquake and teams earned the most points by taking appropriate action. Puzzles included:

For more details on our puzzle sequence and narrative of the game, check out the puzzle narrative and our moderator scoring rubric.

To ensure understanding of the importance behind these fun activities, participants attended a post-game education session with a Geology professor who specializes in earthquakes and Red Cross preparedness instructors. This session translated the game’s activities into vital survival recommendations grounded in earthquake science. The session covered why having a kit was important, why we don't recommend running to doorways, what to do if cover is not available, information about injuries and damages that occurred in 1994 and where to go to find additional information. All teams attended the session and many were quite enthusiastic, asking important clarifying questions about what they had experienced during the game. After the education session, players were given their participation prizes:

113 students participated in Beat the Quake and according to a post-event survey (response rate 61%) 100% said they would like to see the event held at least annually. Participants retained a high level of earthquake knowledge, with over 98% correctly identifying the appropriate action to take during an earthquake, despite the fact that most participants (72%) had not engaged in any disaster preparedness activities before the puzzle room.

A CSUN administrator who sent a group of student assistants to participate in the event, shared that when they returned to the office they moved and secured items to prevent earthquake damage, and even ordered the proper straps to secure bookcases. This example showcases how the actionable value of Beat the Quake has directly improved earthquake preparedness.

This novel puzzle room format is a highly impactful educational method for communicating earthquake risk. The peripheral impacts of Beat the Quake reach far beyond campus boundaries: participants resided in 56 distinct zip codes. CSUN is not only an educational institution, but also a cultural hub in the San Fernando Valley. While students are members of the campus community, they are concurrently members of other cities, neighborhoods, and counties in Southern California, and will bring their most memorable and impactful lessons back to their present and future home communities.

Beat the Quake will be held again at California State University Northridge during the 2017 Spring Semester. The researchers intend to organize the event on an additional campus, with different demographics than CSUN to obtain more data about this method for communicating earthquake preparedness to college students. Researchers are currently exploring publication on the pilot event in an academic journal and presenting results to various professional organizations.

The event will also be featured in the Federal Emergency Management Agency Region IX’s forthcoming publication on Community Preparedness Best Practices. If you are interested in more information about the event for a publication or for implementation in your own jurisdiction, contact Jenny Novak creative director and executive producer of Beat the Quake.