Take the Pledge Against Assault During the “It’s on US” National Week of Action! 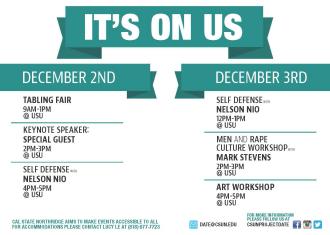 In September, the White House launched “It’s on Us,” a nationwide campaign to end sexual assault on college campuses. Now, a National Week of Action is bringing attention to sexual assault all across the country, inviting everyone to take a pledge against violence.

Strength United’s Project D.A.T.E, a peer education program in rape prevention at CSUN, is bringing It’s on Us to the CSUN campus with a range of events on December 2 and 3. 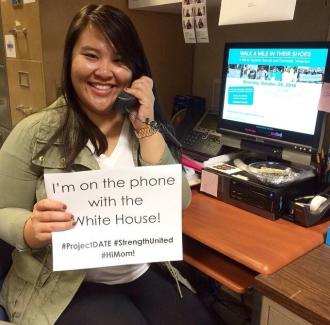 In fact, Project D.A.T.E was one of the on-campus groups crucial to the launch of It’s on Us. Last spring, Lucy Le, Project D.A.T.E. Prevention Education Specialist, was invited to the California Coalition Against Sexual Assault (CALCASA) Student Summit where I met forty other students from universities all over California who were also involved in sexual assault and rape prevention on their campus. Lucy was then asked back as a panelist for the CALCASA 2014 Leadership Conference.

After that, the National Campus Leadership Council invited Lucy to participate on several conference calls with the White House in which the details of the It’s on Us campaign were laid out.

We are so proud of Lucy and all the Project D.A.T.E students working every day to end campus violence!