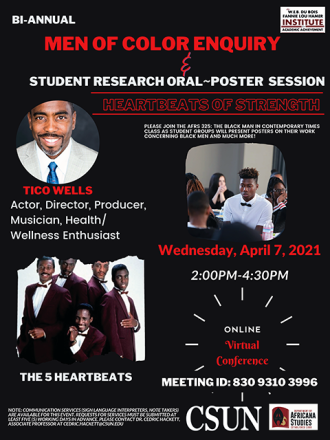 Please join us for the Spring 2021 Bi-Annual Men of Color Enquiry & Student Poster Session. The theme for this semester's event is Heartbeats of Strength with special guest, actor, director, producer and wellness enthusiast, Tico Wells.

Tico Wells is an actor, director, producer, musician, and health/wellness enthusiast. He is best known known for his role as Choir Boy in the 1991 film The Five Heartbeats. He has also appeared on The Cosby Show, 227, Hallmark movies and Beverly Hills, 90210. He was Tim in the movie The Wish List, and played Dexter Williams, the younger brother of Denzel Washington's character Demetrius Williams, in Mississippi Masala. He starred as Kirkland J. Ellis, III, in the independent film Big Ain't Bad, a romantic drama that won Auds honors at the Hollywood Black Film Festival. He made a cameo in the Martin Lawrence show, Martin as "Sweet Reggie."