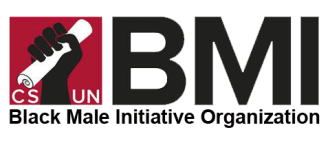 The Black Male Initiative Organization is a mentorship based program designed to motivate and support academic success for minority male students on the CSUN campus. The program was created to specifically address the growing concern for African American men’s declining college enrollment, academic disengagement, academic underachievement, and overall low rate of baccalaureate degree completion at California State University, Northridge. It is important to note that this program, and the university at large, recognizes other ethnic groups and genders who also struggle with academic difficulties but the African American Male student population unfortunately reflect the lowest statistics, nationally, (at this time) across all other racial groups and genders. Thus, additional creative intervention is needed to address this unique trend among African American men. Based on the current trend of academic struggle for African American men on this campus (as reflected across the country) CSUN administration expressed a concern, which resulted in the proactive recommendation for the construction and ongoing development of CSUN programs to address the current problem on this campus by exploring the underlying complexity of this trend. The university desires to generate relevant programing in an attempt to reverse this growing and alarming condition on CSUN campus.

The specific goal of this mentor based program is to apply positive anti-deficit models and research based intervention to build a viable foundation for academic success, and to enable strong character development to produce quality men who will contribute to our communities around the country and to our society at large.

Become a Part of the BMI