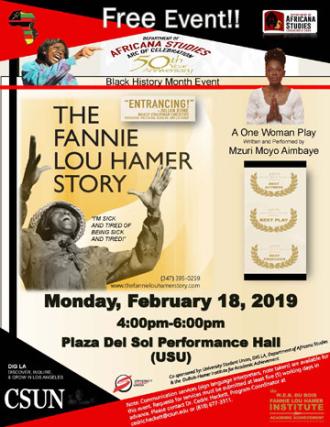 Mzuri said. “I always saw myself doing something extraordinary through singing.” Mzuri’s dramatic soprano voice took her from her Paterson, N.J. birthplace to nightclub gigs in Paris, France, and Rome Italy.

Destined to sing and bring love and peace to the world, Mzuri, has performed all over the united states and abroad. She lived briefly in Paris and Italy, where she trained as a singer. She trained as an actress at HB Studio, New York City.

Upon her return from Europe, she was cast as Lucy for the cultural film “SANKOFA”. A writer since childhood, Mzuri has performed in a variety of venues including colleges and universities. Her recent concert debut at Lincoln Center was widely acclaimed. A star of both stage and film, a critic once wrote of her, “when Ms. Mzuri sings, God smiles, and angels flap their wings.” In this one-woman show, mZuri presents… Ms. Fannie Lou Hamer, up close and personal. This presentation in word and song, captures a little known but very important moment in history and lays it at your feet.

When Mzuri saw a tape of civil rights icon Fannie Lou Hamer on Gil Noble’s “Like It Is” television show she found the model for the role that has since shaped her acting, writing and singing career. “After she (Hamer) told how she was beaten, I still did not see one ounce of hate in the woman,” Mzuri recalled. “That blew my mind. I could not get how she could not hate the people who treated her that way. I had so much rage in me, racial rage, and I had not gone through anything like she had gone through. That rage was part of the reason I went to Europe.”Mzuri instead channeled her anger into writing a one-woman show about Hamer.

Communication services (sign language interpreters, note takers, real-time captionists, or assistive listening devices ) are available for this event. Requests for services must be submitted at least five (5) working days in advance. Please contact Dr. Cedric Hackett via email or call (818) 677-3311 for more information and to arrange for services.