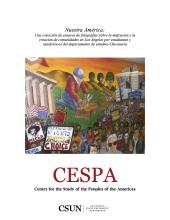 As part of the effort, students in four different classes were given the opportunity to produce short photo essays either on their community or their migration stories. They were encouraged to submit and present the work in Spanish.  Twenty-two students submitted the assignment, which CESPA edited and compiled into a book for Mr. Mario Augusto Carranza, a Guatemalan national who resides in Cuba,  to take back to the island and share with members of his community. Five students and three faculty members presented their photo essays on November 18, 2015 at the event “Our América: A Collection of Photo Essays by Chicana/o Studies Students on Migration and Community Formation in Los Angeles.”

On September 26, 2014, three students and three bystanders were killed by police and 43 student teachers were disappeared in the city of Iguala, Guerrero. A group of student teachers and relatives of the disappeared engaged in a caravan tour across the United States as an effort to bring attention to the situation and to place pressure on various entities to find those forcibly disappeared. CSUN was the first location that the caravan visited and CESPA organized an event on campus held on March 19, 2015. Faculty and students were greatly impacted by the presentations of Cruz Bautista and Angel Neri de la Cruz Ayala. After a year and a half since the disappearances, parents of the disappeared and some of the student teachers decided to once again engage in an effort to create awareness about the situation and put additional pressure to locate the disappeared. CESPA followed up on this event by organizing a student art exhibit on Ayotzinapa. A reception, poetry reading, and graduate student performance were presented on May 4, 2016.

Social justice artist Ana Teresa Fernández led a hands-on painting workshop to a packed room of students and faculty on October 26, 2016.  As part of this workshop, she spoke about the ways in which museum spaces are painted in stark white and do not match the color of the world around us. To combat this, students were asked to paint color palettes using acrylic paint. The completed palettes were then installed and put on display in the hallway of Jerome Richfield Hall at CSUN.