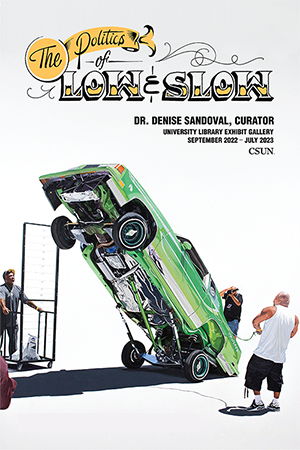 Join us for our opening reception of The Politics of Low and Slow exhibit, curated by Denise Sandoval, CSUN Professor of Chicana and Chicano Studies. This year's exhibit celebrates Chicano lowrider culture in Los Angeles. Explore this unique exhibition for a better understanding of lowrider culture, and the history and spirit of a cultural expression that today crosses regional, national, and international boundaries.

Professor Sandoval has served as guest curator for multiple exhibitions focusing on lowrider culture. Most recently, Denise was the guest curator for the exhibition, The High Art of Riding Low: Ranflas, Corazón e Inspiración (July 2017 - May 2018) at the Petersen Automotive Museum in Los Angeles. Also at the Petersen, she was the guest curator/community researcher for La Vida Lowrider: Cruising the City of Angels (2007-08) and Arte y Estilo: The Chicano Lowriding Tradition 2000). In addition, Denise was a guest curator/writer for a virtual exhibition entitled Lowrider: An American Cultural Tradition for the Smithsonian Center for Latino Initiatives. Her work on lowrider culture was featured in two different documentaries on lowriders, Automaniacand Modern Marvels for the History Channel.

In May 2012, she co-edited a book with award winning author Luis J. Rodriguez titled Rushing Waters, Rising Dreams: How the Arts Are Transforming a Community for Tia Chucha Press, which documents art activism in the Northeast San Fernando Valley. The book was awarded a bronze medal from the Independent Publisher Book Awards (IPPY) in June 2013 and also was awarded the PEN Oakland-Josephine Miles Award in December 2013. Her most recent book project is titled White Washing American Education: The New Culture Wars in Ethnic Studies (2016), which is a co-edited two volume set published by Praeger, with contributed essays on issues in Ethnic Studies in both K-12 and higher education. The books were recognized as being one of the “Best Reference Titles of 2016” in the category of Social Science by the Library Journal. Professor Sandoval has also had multiple shorter pieces on lowrider culture published, including entries on “lowriders” and “Cholos/as” in The Oxford Encyclopedia of Latinos and Latinas in the United States (2005).

At CSUN, Denise teaches courses such as Introduction to Chicano Culture, History of the Americas, History of the Chicana/o and Third World Woman and La Chicana. Her research interests include popular culture and the arts, cultural histories of Los Angeles, oral history and community histories.

Parking and Location: Parking can be purchased at Information Booths and automated dispensers in all lots (see Visitor Parking Information(link is external)). The University Library Exhibit Gallery is on the west wing, second floor of the University Library (see CSUN campus map(link is external) and Second Floor wayfinding map), and is accessible by both elevator and escalator. Please enter on the Library Main Floor from the west side, due to construction.