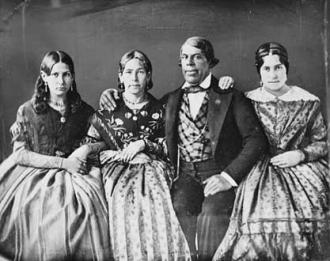 El Pueblo de Los Angeles Historical Monument (El Pueblo) will open Forgotten Founders: The Hidden African Ancestry of L.A. at the historic Pico House in downtown Los Angeles. During its one-month installation, this collaborative exhibit will trace the role of individuals of African descent in the founding of Los Angeles. While emphasizing the diverse racial, ethnic, and cultural backgrounds of the forty-four pobladores who founded the pueblo on the edge of the Los Angeles River in 1781, the exhibit will also trace the connections between this specific event and the broader history of communities of African descent in Mexico and the American West.

This exhibit is brought to you in part by California State University, Northridge Public History Program. This project takes CSUN Public History students out of the classroom, away from traditional textbooks, and into the rich world of public history. More specifically, students have the unique opportunity to practice “hands-on” history through researching and curating a historical exhibit for a public audience. The exhibit is also presented in conjunction with the National Parks Conservation Association and the Huntington-USC Institute on California and the West.

Inside the historic Pico House, visitors will have the opportunity to traverse an exhibit that traces various themes throughout Los Angeles’ history and the city’s longstanding diversity. Following the racial and ethnic lineage of Los Angeles’ original founding families, “Forgotten Founders: The Hidden African Ancestry of L.A.” will include the forced migration of African slaves to New Spain and the settlement patterns of mixed families in Alta California. Additionally, the exhibit will explain the way racial and ethnic boundaries were organized in Spanish settlements like Los Angeles and reveal the significant impact of mixed race individuals and families in early Los Angeles history.

During the seventeenth and eighteenth centuries, the sparse population of New Spain’s Northern frontier comprised of an intermixed community of indigenous, African, and Europeans. Los Angeles’ families reflected the complicated racial background and classification of New Spain during this period.  In fact, half of these forty-four pobladores that settled Los Angeles in 1781 were of African descent.  So, Los Angeles, one of the world’s most ethnically and racially diverse cities, actually arose from a small group of settlers who traced their lineage to Spanish, African, and indigenous roots.

This historical landmark is also a department of the City of Los Angeles. Their mission includes the management and preservation of the historic El Pueblo de Los Angeles. While maintaining the facade of the plaza, El Pueblo also preserves and promotes the diverse cultural aspects of the pueblo and provides various educational opportunities for Angelenos and tourists to enjoy. El Pueblo prides itself on making the various elements and educational expositions accessible to all people, making them free to the public.