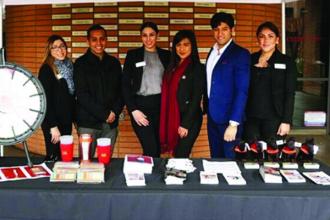 This daylong event was held by local and state government officials, including the California State Board of Equalization, as part of a major outreach effort designed to empower low-income taxpayers in the community.

Throughout the day, the CSUN VITA student volunteers and the Wells Fargo staff collaborated to offer free tax preparation and financial education to taxpayers from the community. Wells Fargo had its experienced bankers conduct financial literacy workshops in English and Spanish while the tax preparation services were being offered to taxpayers on campus. Wells Fargo was one of the CSUN VITA Clinic’s major sponsors this year; its generous donation of $25,000 in 2017 helped the CSUN VITA Clinic and its volunteers to reach out to the community. Wells Fargo provides banking, insurance, investments, mortgage, and consumer and commercial financial services, with more than 8,600 locations nationwide. Wells Fargo’s corporate social responsibility is rooted in its culture of caring for its communities.

In 2016 alone, Wells Fargo contributed $281.3 million to more than 14,900 nonprofit organizations across the country. According to Jack Olree, Wells Fargo’s vice president of community relations, “We are proud to support CSUN and its VITA efforts helping low- to
moderate-income families not only receive free tax preparation, but also helping them obtain the Earned Income Tax Credit (EITC). ”EITC is a federal refundable tax credit designed to provide tax relief and financial support for low- to moderate-income families. However, many qualified taxpayers are unaware of this important provision in the tax code and fail to claim the benefit on their tax returns. The amount of the tax credit is dependent on an individual’s or jointly filing couple’s income and number of children. According to recent IRS reports, up to $1 billion in EIT credits remain unclaimed.

Olree believes awareness of EITC is crucial as the credit serves as “a boost to families and communities and greatly reduces poverty.” The EITC helped more than 1.2 million people in California who were in a state of poverty in 2013. In 2014, the EITC put more than $7.7 billion into the hands of California families. Become a CSUN VITA Scholar in one of our remote sites.

Tell your friends and family about the free tax preparation services offered by the CSUN VITA Clinic.

Support us by donating at vita.csun.edu

Become a VITA (Volunteer Income Tax Assistance) site for a day or for the season.

Tell your employees, clients or customers about our free tax preparation services.

Thank you to our generous sponsors: