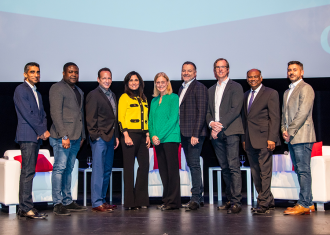 No doubt, when Ridley Scott crafted “Blade Runner,” he didn’t picture November 2019 the same way we do now. In the 1982 sci-fi classic set in the future — an alternate version of November 2019 — flying cars and evil androids were the makings of a bleak, dystopian universe. While there isn’t open conflict between robots and humankind, the film did predict a few things correctly. It correctly predicted video phones, voice control, artificial intelligence and — what many fear to be a step toward a real dystopia — the inextricable integration of machines and technology in the workforce.

As technological advancements become more present in workspaces, the question arises: how will machines affect our jobs?

This question was at the heart of the 2nd Annual Workforce of the Future Symposium, which took place on Nov. 20 in the Grand Hall of the Younes and Soraya Nazarian Center for the Performing Arts, conceived and organized by CSUN’s David Nazarian College of Business and Economics.

The event featured keynote presentations and a panel discussion that focused on how technological advances are changing media and entertainment, with industry leaders IBM, Gracenote — a Nielsen Company, and PricewaterhouseCoopers (PwC). Topics included major strides in artificial intelligence, 5G and Edge, blockchain and quantum computing, and explored how the new generation of professionals can keep up with rapidly advancing tech.

“Employers hire for skills, but they promote for attributes,” CSUN President Dianne F. Harrison said in her opening remarks. “We are here to inspire curiosity and courage and to motivate you to commit to lifelong learning — it’s really the only option to succeed and thrive in the workforce of the future.” 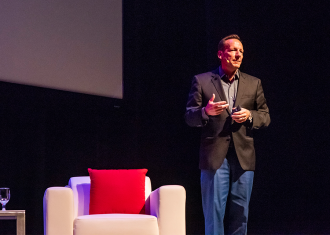 Two presentations described the ways IBM is using technology to more quickly gather and process the droves of data being generated today.

In the first, Steve Canepa, global managing director of telecommunications, media and entertainment industry at IBM, spoke about Watson, a computer system developed by IBM capable of answering questions asked in natural (i.e. non-code) language, as well as the advent of 5G and Edge computing.

Then, in a keynote presentation, Gavin Jones, research staff member for quantum computing at IBM Q, detailed the development of IBM’s quantum computer, which utilizes quantum mechanics, the motion and interaction of atomic and subatomic particles, to process data exponentially faster than today’s computer.

These developments and the efficiencies they offer in processing information, they said, can immensely benefit a vast number of industries.

Among these industries are media and entertainment. Over-the-top (delivered directly to users via the internet) media services, such as Netflix and YouTube, take advantage of the ability to process hefty amounts of user data through these systems in order to find trends in viewer activity, as well as make recommendations for programs or videos for users to watch, Canepa said.

Are Machines Taking Over?

Throughout the event, a number of studies were referenced that point to a possibility of a future wherein machines dominate the workforce. In her opening remarks, Harrison noted one conducted by research firm Gartner, Inc. that suggests approximately one third of the current jobs in the United States will be eliminated by alternatives found in software, robots and smart machines.

However, while many jobs are being eliminated, many are also being created. During the panel discussion, Chad Andrews, global solutions leader for advertising at IBM, echoed that, reminding the audience that innovations are supposed to be tools, not threats.

“We have this vision about dystopia, and it’s based in the sense that technology isn’t going to serve humanity, except if you take the optimistic view that [technologies] are tremendous tools that are incredibly crucial for us to improve and redefine our condition,” Andrews said. “The generation to come is going to start to read and imagine things that our generation couldn’t even imagine because of the potential of this technology.”

The Workforce Gets an Update 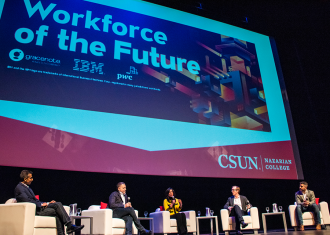 At PwC, even employees fulfilling financial, tax and legal services, among others, are being equipped with skills that can help them work with data. Mitra Best, lead principal for strategic innovation and technology for PwC, who was also in the panel, said that about 55,000 employees in the firm are being upskilled to understand data and even be able to write simple algorithms.

“In media, we have a huge disruption in the workforce because of all the things that we’re building,” she said. “However, creativity is what makes the media and entertainment work — the creativity of humans.

“No matter how technical you are, if you don’t have leadership and creativity, you cannot go far,” she said.

During the Q&A that followed the moderated discussion, the panel was asked about how students at CSUN can maximize their time in university and ready themselves for their professional careers.

The general consensus among the panel? Major in or take classes on anything that works with data, since new jobs spring from the rising need for data experts, which is a point that Chandra Subramaniam, dean of the Nazarian College endorses.

“At the Nazarian College we’ve developed a strategy with a simple philosophy – data first,” he said. “We are making changes to curriculum, our co-curricular programming, our competitions and challenges, our technology infrastructure, and our engagement with student clubs and organizations – all of them within the ‘data first’ framework.”

Experts also recommended classes or training that will develop soft skills, such as leadership, communication, critical thinking, and problem-solving.

Best endorsed studying ethics, which, she said, is a significant differentiator between establishing a world akin to the dystopia in “Blade Runner” — where innovation has led to the destruction of society — and harnessing the power of technology to improve lives.