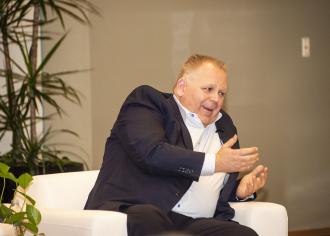 When Southern California native Mike Kramer ’90 (Finance) first set foot on Wall Street in 1994, he was shocked to see that it was nothing like the soaring, imposing skyscraper temple he’d seen in movies and TV. The fabled street in the oldest settled section of Manhattan is a narrow, dark alley.

In 1993 Kramer, while at LA-based investment bank Houlihan Lokey jumped at the chance to take a temporary assignment in the firm’s New York office — which turned out to be in Midtown Manhattan, like most massive “Wall Street” banks and financial firms. The incessant pace of the city, being away from home, the subways, the winter weather — they were all daunting to the San Fernando Valley native, who’d never really traveled outside his sunny home state. But Kramer went all in, pouring his trademark work ethic — 80- to 100-hour weeks, a never-say-die attitude toward closing deals — into his work in Houlihan’s restructuring practice. He was in New York to stay.

Kramer, a multigenerational Matador and proud graduate of California State University, Northridge, has made an impact on Wall Street that few other men and women can claim: A lifelong leader in “boutique” investment banking firms and now founding partner and CEO of Ducera Partners, Kramer has helped forge some of the largest deals in modern financial history, including 2018’s $70-billion sale of agricultural giant Monsanto to Bayer A.G..

He represented the federal government, through the FDIC, in helping shore up the U.S. financial system during the 2007-08 crisis (which launched the Great Recession). More recently, he is involved in the restructuring of Puerto Rico’s financial system. In a much lighter arena, he’s a sports nut who has been the architect of sales of franchises including the Texas Rangers, the New Jersey Devils and the Dallas Stars.

Both of his parents, his aunt and his niece are also CSUN alumni, and he visits family regularly in the Valley. But it was a deal, of course — the bankruptcy and restructuring of utility behemoth Pacific Gas & Electric (PG&E) — that brought Kramer back to California on March 6, when he took the opportunity to visit his alma mater and meet current students in the David Nazarian College of Business and Economics.

Kramer addressed a crowd of about 200 students in the University Student Union Grand Salon, as well as faculty, alumni and even a few of his aunts and uncles, who surprised and delighted the CEO when they arrived and sat down in the front row.

He sat on stage with moderator and finance professor Mike Phillips, a mentor and friend to Kramer since his university days, when the business student took five classes from Phillips. Earlier in the day, Kramer also gave a guest lecture and took questions from Phillips’ investing class at Bookstein Hall, where he held the students in rapt attention for about 90 minutes.

“He probably had more classes from me than any other student in the history of my career,” Phillips said, grinning. “Despite that, he’s gone on to become absolutely a rock star in the world of finance. I’m delighted to have him here with us today.”

In the evening program at the Grand Salon, the affable Kramer spoke about his time at CSUN, his career trajectory, and the current landscape of investment banking and global deals.

“I’m fortunate to have been at the forefront,” Kramer said. “I get a lot of credit for the deals people have read about, but I have seven partners at Ducera — I have a strong team that has been with me most of their careers. My success is all of ours.

“Early on, I learned that that team is really important,” he said. “You can be the best analyst or investment banker, but unless people want to work with you, it doesn’t matter.”

At the age of 26, Kramer became the youngest partner in Houlihan Lokey’s history. Following his tenure there, Kramer became a partner at Greenhill & Company and Perella Weinberg before founding Ducera Partners in 2015.

He has led restructurings or sales of iHeart Radio ($20 billion), Nieman Marcus ($5 billion) and advised clients including GE Corporation. When asked about his favorite or most memorable deal, he recounted his work with struggling Hostess Brands in 2012.

“It’s the great American icon, the Twinkie. We can’t live without our Twinkies,” Kramer said, smiling. “Seven years ago, I was called by the board of Hostess. They said, ‘We’re having a lot of financial trouble, we’re running out of money — we don’t know how we’re going to continue. Can you come in and help us think through this? (Read the Full Story on Michael Kramer Here.)