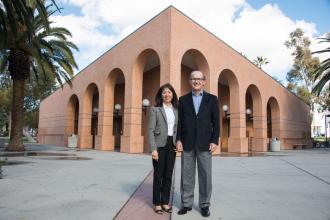 Charles “Chuck” Noski ’73 (Business Administration), M.S. ’95 (Accountancy) ’07 (Honorary Doctorate) was 17 years old in 1969 when he embarked on what would be a lifelong relationship with CSUN, then known as San Fernando Valley State College. Working two to three part-time jobs as an undergraduate, Noski earned a bachelor’s degree in business administration in 1973. He returned in the 1990s to earn a master’s degree in accountancy, and CSUN awarded him an honorary doctorate in 2007.

The lessons he learned at CSUN helped him gain the business acumen that would lead to a brilliant career: Following nearly 20 years with “Big Four” accounting firm Deloitte & Touche, Noski went on to hold senior executive positions at AT&T, Bank of America, Northrop Grumman and Hughes Electronics.

On Feb. 5, Noski was named by the Association to Advance Collegiate Schools of Business (AACSB) to its 2019 Class of Influential Leaders. CSUN’s David Nazarian College of Business and Economics’ accreditation by AACSB International places it among the top 5 percent of global business degree-granting institutions. The college’s accounting, finance and financial planning programs are regularly ranked among the nation’s best by experts in those fields.

In its fourth year, the association’s 2019 “Influential Leaders Challenge” recognized 33 alumni — and the business schools that prepared them — who personify the role as a visionary figure or change agent. Each of AACSB’s 831 accredited institutions were invited to nominate up to two of their outstanding alumni for consideration. The 33 honorees hail from 13 countries around the globe. (Read the rest of the story here.)