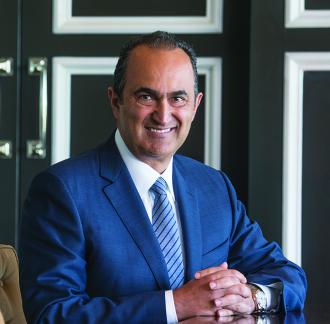 Mr. Nazarian is a graduate of the California State University, Northridge College of Business and Economics, earning his bachelor's degree in business administration in 1982. Mr. Nazarian is Chief Executive Officer and founder of Nimes Capital.

In his 30-year career, Mr. Nazarian has established a consistent track record of identifying opportunities ahead of the pack, actively managing those investments and executing effective monetization strategies across a diverse range of investment classes and industries. Mr. Nazarian’s history as a visionary investor and business builder began with his active involvement in his family’s early identification of the potential for wireless communications technology which ultimately became part of Qualcomm, Inc., one of the most successful corporations in the history of the telecommunications industry.

Capitalizing on the success of Qualcomm, Mr. Nazarian focused on investment opportunities that could be utilized to diversify his family’s holdings. Mr. Nazarian displayed his acumen and investment vision by orchestrating the roll-up of aerospace equipment manufacturers during a challenging period in a highly cyclical industry; acquiring vast holdings of real estate from the Resolution Trust Corporation in the early 1990s; and strategically investing in the hotel industry following the economic downturn in the early 2000s, then divesting a majority of those investments prior to 2008. Mr. Nazarian started three early-stage venture funds concentrated on wireless communication and broadband infrastructure businesses, and he backed highly innovative clean technology companies. Mr. Nazarian’s philosophy is to be active in the management of investments via a variety of roles, including serving as an executive, investment committee member, member of the board of directors and/or formal advisor to the underlying companies.

In addition to his business activities, Mr. Nazarian is extremely active in the greater Los Angeles community through his support of numerous charitable organizations, including his role as Chair of the Investment Committee and a member of the Board of Directors of the UCLA Foundation, his involvement with the Board of Governors and Investment Committee for the Cedars-Sinai Medical Center and his membership on the USC Marshall School of Business Board of Leaders. After earning his bachelor’s degree in business administration from CSUN, Mr. Nazarian received his MBA from the University of Southern California.

Furthermore, in March 2014, Mr. Nazarian pledged to help lead a $25 million fundraising drive and launched that effort with a $10 million cash gift. In recognition of his gift and pledge of continued support, CSUN named its college of business the David Nazarian College of Business and Economics. The gift will enhance entrepreneurship and international programming, provide professional development and career assistance to students, and elevate the success of women in business. (Read about the Nazarian Gift).