Seven BUILD PODER seniors from the class of 2019 share their stories of empowerment as they move forward in their journey as scientists! Students featured in the order of appearance: Esteban Bautista, Angelica Alberto, Christian Sotelo, Federico Prokopczuk, Victoria Womble, Erick Perez and Andrezonae Johnson. BUILD PODER is an NIH-funded biomedical research training program at California State University, Northridge. Watch the full video above or at Youtube. 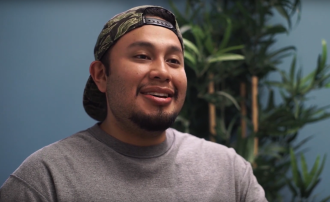 Esteban Bautista came into the BUILD PODER program as community college trainee, transferring to CSUN from East Los Angeles Community College. In the fall, he will be applying to Ph.D. programs in chemistry, a position he says he couldn’t have imagined growing up as a youth in a low-income neighborhood, where substitute teachers for biology and chemistry were the norm. Baustista, who has now been published in scientific journals multiple times, attributes his college success to the direction and support he received through BUILD PODER. He will graduate with a bachelor’s degree in biochemistry and apply to doctoral programs in the fall.

“Coming from my community, I literally didn't even have a chemistry teacher in high school or a biology teacher," Bautista said. "When I was in ninth grade, my biology teacher was a substitute teacher. We actually had substitute teachers coming in and out every week, and at one point, one of the substitutes became our teacher, so she would literally have a piece of paper and just put whatever was on that paper on the board—and that was bio class. The same thing happened in my chemistry course the following year as a sophomore. So then it's kind of ironic now that next year I will be graduating with a degree in biochemistry."

Once Bautista got into the BUILD PODER program, he said he quit his job delivering sandwiches and did research full-time.

"It's just indescribable how many ways it helped me academically," Bautista said. "The most important thing is that it gave me direction, because as a community college student, I wasn't really exposed to what research was. I didn't really know about higher education past a bachelor's degree, I didn't know about the master's program, I didn't know about Ph.D. programs. 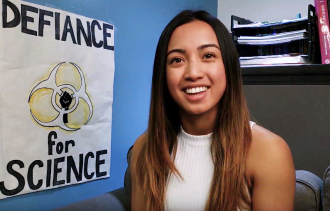 Angelica Alberto graduated with a bachelor’s degree in kinesiology and will begin at Northwestern University in their dual-degree program to earn a Master of Public Health and a Doctor of Physical Therapy. Alberto, who during her freshman year, started her own non-profit to help underserved students with school supplies, shared how BUILD PODER helped her achieve goals she never thought she would.

“Growing up I was definitely more of the artistic type — I wanted to be an artist, I loved painting and so thinking of being a scientist was not really in my scope of what I intended for my later life. It's crazy to think how much has changed. And it's not that I'm not as creative as I once was, but I'm able to use whatever curiosity and questioning that I had as a child now in my line of work. I think that's so important nowadays because we provide fresh new ideas each day to whatever fields were getting into. And I think that's the beauty of BUILD—you empower students who have ideas and who have dreams… I think that's what's going to be the game changer for the next generations to come."

Mechanical engineering major Christian Sotelo is known to his peers as a successful student, with multiple summer research experiences, awards and internships under his belt. However, Sotelo faced a steep learning curve at the beginning of his college journey. Sotelo said BUILD PODER gave him the opportunity and support to stay on his upward academic trajectory.

“When I was growing up, I did not see science as an option. I grew up in a very low-income community where science wasn't really… projected onto students, it was more of like, "hey, you know, here’s school, try your best at it." I wasn't expected to go to college after, so yeah my identity with the sciences was very rough towards the beginning of my academic career.

BUILD PODER has dramatically changed my academic outlook. Throughout this transitional period from high school to the college, and we had that financial aspect where I didn't have to focus on working at a job—research was my job.So I had time to focus on school and just be a part of academia.” 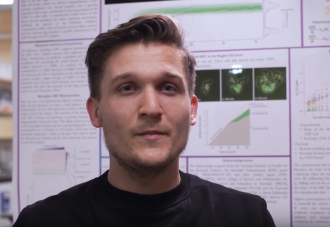 Federico Prokopczuk immigrated to the United States from Argentina with his family when he was four years old. Like many working-class  families, Prokopczuk said his was impacted during the 2008 financial crisis, but stayed resilient with the motivation to keep going forward. As the first in his family to attend college in the United States, Prokopczuk faced challenges navigating not just the academic aspect of higher education, but the logistical details that others may take for granted in knowing.

“When I started going to college, I didn't realize that when you get accepted to a school you don't automatically get accepted into the dorms,” Prokopczuk said. “I thought that like, you know from college movies, that when you get into a school, you immediately go into the dorms. I picked a school that was 50 to 70 miles away from home thinking that it was going to be great, I'm going to be able to get away from home. I realized that that's not the way that it works and I was stuck commuting back and forth, and I had a car that barely worked.  It was just a struggle and I made a lot of mistakes along the way.”

Despite the setback, Prokopczuk said he got into his stride when he discovered research and joined BUILD PODER. He said the program gave him the social capital he needed to succeed in his abilities.

“BUILD PODER really helped me to focus in on what I really wanted to do,” Prokopczuk said. “I had all this curiosity as a kid, but I wasn't really set up in a place where I had...the resources to really hone in and focus on what I wanted to do. BUILD PODER filled that role.” 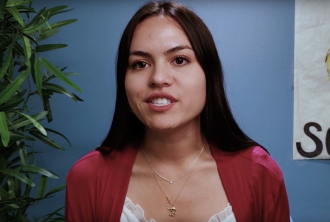 Victoria Womble started off her college career as a soccer player. She decided to take her college life in a different direction when she traded in her soccer cleats for speech pathology research. Womble said she found the support and guidance she needed in this new direction, when she joined BUILD PODER.

With training from her mentors, April Taylor, Ph.D., and David Wakefield, Ph.D., and funding from the program, Womble was able to attend a variety of conferences and complete two summer research programs in Michigan and Texas, working with children and adults with Autism spectrum disorder. Womble said that given her range of research experience, not only did she feel confident in applying to graduate schools, she was getting phone calls and emails from programs recruiting her as a candidate.

“After these three years in BUILD PODER, I can constantly confidently say that I am [a scientist],” Womble said. “BUILD has given me that gift to interact with others.” 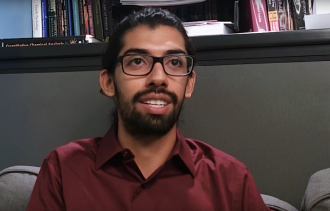 Erick Perez did not see science as an option while growing up. Before enrolling at CSUN as a psychology major, Perez trained as a welder and intended on pursuing that as a career. But the field of experimental psychology kept his interest and Perez decided to try his hand at academic research.

“This whole research route was not what I was going to take, but fortunately I was able to find out about BUILD PODER,” Perez said. “I pursued it and here I am, it's kind of really changed my trajectory by a whole 180.”

Perez said the moment he truly felt like a scientist is when he got his acceptance into the University of California, Riverside, for their Ph.D. program in psychopathology.

“I said wow, like it is really happening, I'm really doing this. I'm really going to dedicate my life to being part of this program and then afterwards the career goals I would have with that… This is for real, I'm a scientist.”

Perez said BUILD PODER empowered him to be confident in his abilities and competence in academia.

“I never wanted to be the person raising my hand or giving a speech or anything like that because I never felt like my work was good enough or that I had anything worthwhile to present. Now with BUILD, now I get a joy in being able to go to these conferences and show them my work.” 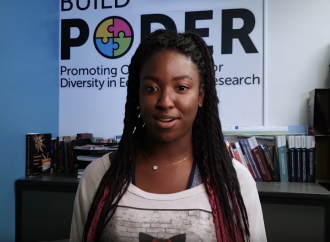 Andrezonae Johnson’s research in food science is inspired from her own personal health experience. During finals week in her freshman year at CSUN, Johnson said she went to sleep around 8 p.m. one evening and woke up at 4 p.m. the next day, causing her to completely miss one of her finals. She went to a doctor and found out she had Hashimoto Syndrome, an autoimmune disorder where the body attacks the thyroid gland. She was told that there was nothing she could do but take medication for the rest of her life.

Unsatisfied with that prescription, Johnson decided she needed to find alternative solutions. Johnson said that looking back, her search for answers to solve her own health problem was her first research experience and primed her to become a scientist.

“The goal at first was just a stop taking medication,” Johnson said. “Once I saw what the [disease was] about, I saw that your nutrition actually plays a really huge role into your metabolism. A month later... I changed my major to food science and nutrition.”

Soon after, she joined BUILD PODER and worked with a CSUN mentor to explore food science research. Last summer, she completed a summer research experience at the University of Southern California, working in a diabetes lab. She got the opportunity to shadow surgeons and physicians, introducing her to the option of pursuing an MD-PhD dual degree—something she didn’t know was possible.

“I want to do research and I want to take that research into medicine, something that not a lot of people do,” Johnson said. “I feel like it's important that more of us do that.”

Johnson said doing her research experience at USC led her to her current summer research opportunity at Harvard University.

“BUILD PODER  empowered me in a way where I feel like I can go to any field, and regardless if I know a lot of information in it, I can still learn,” Johnson said. “To me PODER means having the self-efficacy to know that you can do anything that you want to do, regardless of what your environment has ever been or what anyone else has ever told you.”