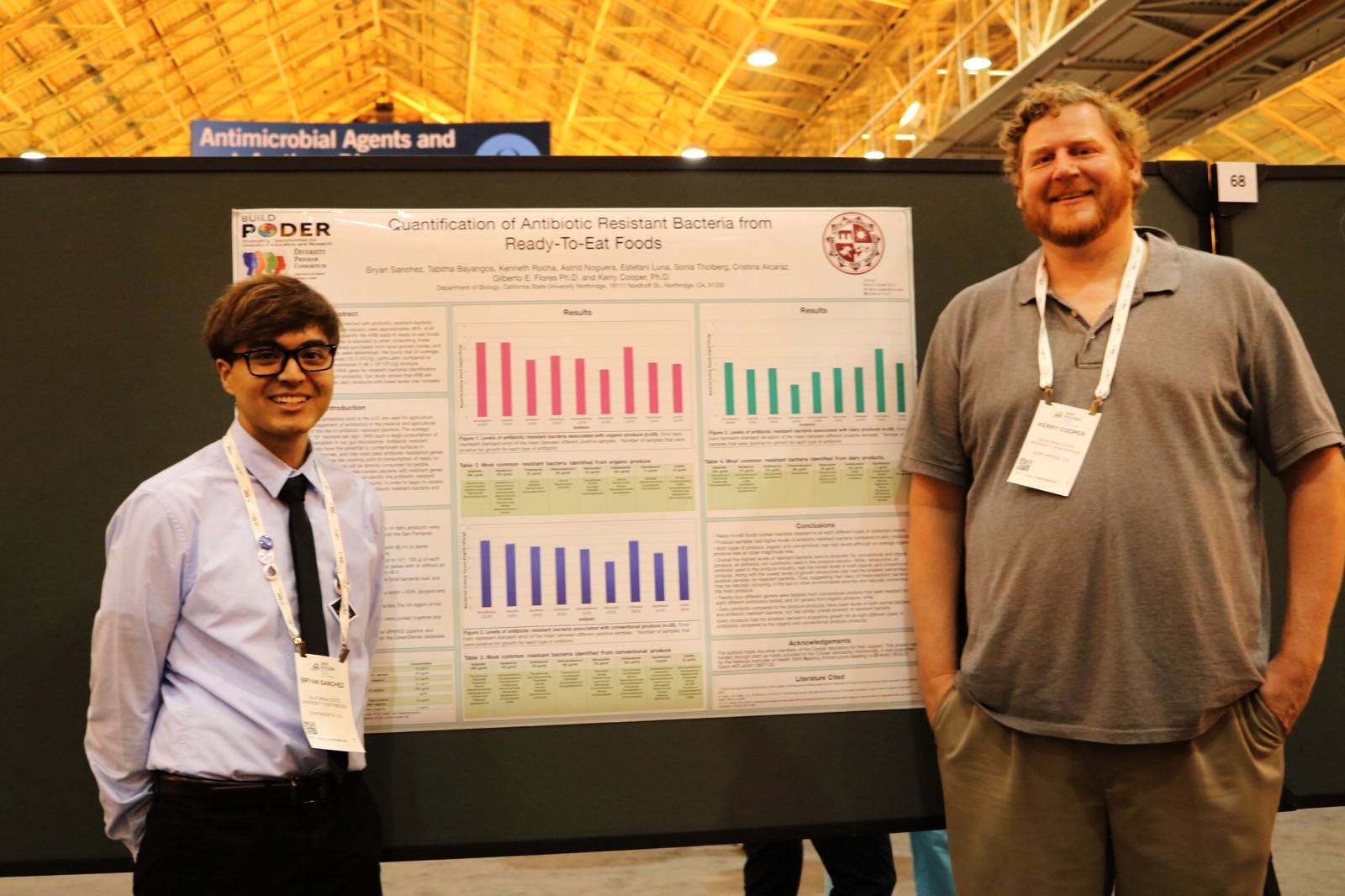 BUILD PODER Scholar Bryan Sanchez presented his research on antibiotic-resistant bacteria (ARB) in ready-to-eat foods at the 2017 American Society for Microbiology’s (ASM) Microbe Conference. Sanchez is a senior at California State University, Northridge majoring in cell/molecular biology. This past year, he worked on ARB research in the lab of his mentor, Dr. Kerry Cooper, professor of biology at CSUN.

Sanchez's research is generating interest in the press, as food-related research is important not only to the scientific community, but to the public. In the United States, about 2 million people are infected with antibiotic resistant bacteria (ARB) every year, resulting in over $35 billion in additional costs. The agricultural industry uses about 80 percent of all antibiotics in the United States, particularly during food production.

In “Quantification of Antibiotic Resistant Bacteria from Ready-To-Eat Foods,” Sanchez and his co-authors—Tabitah Bayangos, Kenneth Rocha, Astrid Noguera, Estefani Luna, Sonia Tholberg and Dr. Gilberto Flores and Dr. Cooper—found that ready-to-eat foods, like dairy projects and fresh produce lack a “kill” step such as cooking, creating a risk for ARB’s to be directly consumed or contaminate surfaces.

ASM Microbe was Sanchez’s first professional conference as a presenter. He said he never expected his research to get this much attention.

“It’s a strange feeling because I didn’t think my research would be so popular,” Sanchez said. “I was extremely nervous to present and I was afraid of being judged by people who have PhD’s and have a lot more experience in the field than I do.”

Dr. Cooper said it was great to see Sanchez and his other students succeed in their work.

“I am extremely proud of Bryan as he has worked very hard all year long to complete his project, and has rapidly progressed to an independent researcher able to troubleshoot problems with very limited input from me,” Dr. Cooper said. ”He and the other students involved on the project worked day and night including weekends over the last few weeks to make sure the project was finalized for the poster presentation at ASM Microbe. While this is a preliminary study that needs additional work, it is through Bryan and the other students’ hard work that we have laid a very good foundation for future studies to completely understand the role ready-to-eat foods play in the transmission of antibiotic resistant bacteria.”

Sanchez said his first time presenting was a successful and positive experience overall.

“It feels very satisfying knowing that all my hard work during the year paid off and I got to contribute to the scientific community,” Sanchez said. “This was an empowering experience for myself.”

Below are links to press coverage of Sanchez’s research: