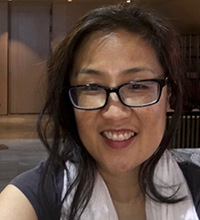 Edith Wen-Chu Chen joined the Asian American Studies department in 2001. She received her Ph.D. in Sociology from UCLA, and undergraduate degree from University of Texas at Austin. Trained as a sociologist, her teaching and research interests include Chinese Americans, Asian Americans, immigration, and health, with a focus on type II diabetes and obesity. She has published a number of chapters and articles on the struggles and challenges of Asian Americans and Pacific Islanders in their assimilation and adjustment in the U.S. She has collaborated on publications such as “Physical Activity in Asian American Populations,” in Physical Activity in Diverse Populations, edited by Melissa Jean Bopp, (Taylor and Francis, 2018) and “Festival Foods in the Immigrant Diet,” Journal of Immigrant Minority Health (2013 Oct). Her family was one of the few Chinese American families in the Dallas-Fort Worth area suburb. Her family’s home served as the gathering place for father’s graduate students from Taiwan, Hong Kong, and China. She also spent six months in Shanghai in 2009 teaching Chinese university students. She has previously taught classes on Asian Americans, Food, Culture, and Health at CSUN and UCLA. You can find her regularly teaching AAS 100 (Intro to Asian American Studies) and AAS 340 (Asian American Women). She was a visiting scholar at Asian American Research Center on Health, University of California, San Francisco in 2015.

The diabetes rates for Asian Americans has been increasing over the last twenty years, with over 1 out of 5 Asian Americans having diabetes, almost twice the rates to their White counterparts (Lee et al., 2011; Menke et al., 2015). More worrisome is that about fifty percent of Asian Americans with diabetes are not aware they have the disease (Menke et al., 2015). Studies have shown that Japanese in Hawai’i, Los Angeles, and Seattle were more likely to have diabetes than their counterparts in Japan (Fujimoto, 1995). A more recent study that collected blood samples from Chinese, Korean, Vietnamese, and Hmong living in Sacramento found that all had significantly higher diabetes rates than those in their country of origin (Stewart et al., 2016). Additionally, those that had spent more than 50% of their life in the U.S. were more likely to have diabetes than those that spent less time, although the results were not statistically significant. We know little about what are the causes of these health disparities, and why the rates of the immigrants and the growing second generation segment are more at risk than in their respective Asian countries. Together, these observations suggest that assimilation, or the process of becoming American, may put immigrant minority groups at risk for diabetes and other chronic diseases (Oza-Frank et al 2011; Popkin & Udry, 1998). This project is interested in understanding the specific social processes underlying the growing rates of Type 2 diabetes in Asian American subpopulations-Chinese American, Japanese, American, Filipino American, Korean American, Vietnamese American, and South Asian.

This summer, the research team conducted focus groups (via Zoom) with Chinese, Filipino and Korean American who live in Los Angeles and Orange County to understand how living in the U.S., culture impacts food habits and health.

Students can play a role by conducting literature review and helping to conduct qualitative analysis. Students will receive training in qualitative data analysis using a cultural insider-outsider approach. Students who speak Cantonese, Tagalog, and Korean are especially encouraged to apply.

Students with strong writing skills and interest in learning about Asian American research methods are encouraged to apply. Familiarity with Chinese, Filipino, and Korean populations is highly desirable. Coursework in any of the areas of study is helpful: social sciences, Asian American Studies, ethnic studies, public health, epidemiology, and/or health education. Other important qualities include good work ethic, able to meet deadlines, and an ability to collaborate with others. Students will gain training in conducting health research with Asian American populations.

Chen, Edith Wen-Chu, “Asian Americans in Sororities and Fraternities: In Search of a Home and Place.” in Brothers and Sisters: Diversity in College Fraternities and Sororities, (edited by Craig L. Torbenson and Gregory Parks.). Fairleigh Dickinson University Press, 2008.

College of Science and Mathematics

College of Engineering and Computer Science